we celebrated 3 times…3 years of marriage = 3 celebrations (not really, it just happened!)

After a long drive back from San Diego we  managed to escape in the evening to watch Moana. Our anniversary is on Wednesday and it made more sense to watch it then to make it special, but somebody couldn’t wait that long so we had to see it tonight. Alee to the rescue and she came over after she was done at work to watch sleeping Summer.

It was worth the wait, I loved Moana- the music made me have goosebumps and the renders of the whole movie was so beautiful. All the characters were well thought out and sometimes random. The only thing missing (which isn’t that big a deal) is there was no love interest, no Prince Charming- which isn’t a bad thing, just guess it being a Disney movie and Moana being a “princess” I thought they would have someone. Guess I’m just a big soppy romantic at heart. Everyone tells you that your actual wedding day goes so fast so savour the moment, but I honestly think it didn’t go fast at all and love reminiscing about the little things that happened that day. I caught myself thinking quite a few times saying “this time three years ago I was…” and each time it still gave me butterflies and filled me with the fondest memories. I can’t believe its actually been three years since we got married, so much has happened.

Once you’re married, there is a tradition that every year is represented by gifts made from certain materials , in theory this makes it easier to find gifts –  but if you’re like me and sometimes get carried away, you end up innocently telling people the wrong information and getting wooden gifts instead of leather! oops.

and we were in pajamas by 8.30pm watching The Walking Dead – so romantic!

Before we even had our flights booked to move to US we had it in our heads that we will spend our next anniversary at our happy place, Disneyland. Ah, it’s got so many special memories for Mark and me and the thought of being able to go there as it’s “just down the road” made it a perfect excuse to go. But, realistically it’s a 45 minute Uber ride away. Not one to give broken promises Mark said let’s go!

But….the more we thought about it, we realised that if we went into the actual parks we couldn’t go on many big rides unless we went alone as we would need someone to stay with Summer, and although we would have loved her to actually meet the real life Olaf and Baloo we can also wait until she would actually remember. So we compromised. we went to Downtown Disney. Now this place has its own magic and is full of great stores so we could do our Christmas shopping  And being so close to the festive season the place was covered in beautiful twinkly lights that made everyone smile. I had been saying to Mark that I hadn’t felt too Christmassy this year but then we discovered Disney’s Grand Californian Hotel  which had one of the most memorable Christmas trees I had seen in a while, I mean look at it! 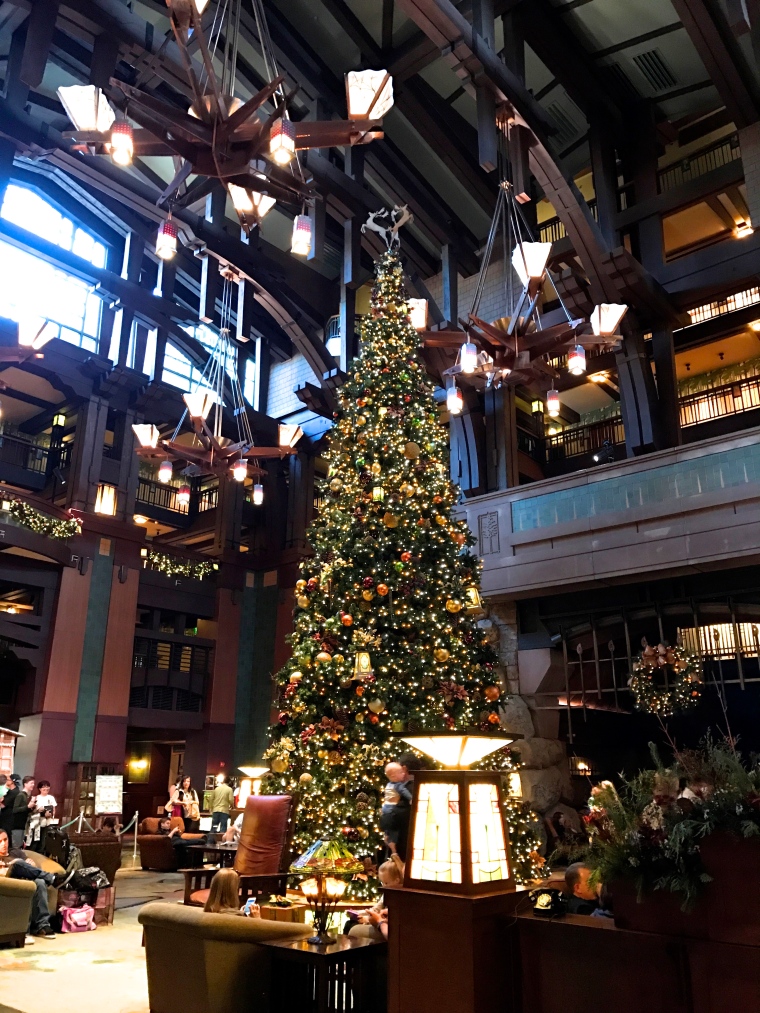 It was enough in there to even make Scrooge feel festive.

We managed to buy a lot of gifts (or ourselves a lot of gifts) so came home very happy. One thing I got myself was this amazing pin from Up. I don’t know where to put it though!